Sangiovese and concrete: we love it!

Concrete tanks: a bit of history

Up until the 1970s, concrete tanks were built in a simple way, and could pose a problem especially when it came to cleaning the tanks themselves. Since the liquid remained in contact with the concrete for several months, thanks to the porosity of the latter, the wine left deposits attached to the walls, the tartrates. These particles, over time, formed a layer which then had to be crushed manually.

With the arrival of vitrification techniques, we began to spread a thin layer of epoxy resin inside the tank itself in order to isolate the wine from the concrete. Thanks to this, we can take advantage of all the benefits offered by concrete without the annoying drawback of internal porosity.

Starting in the 1980s, concrete tanks have been joined, and in many cases replaced, by stainless steel tanks, which had already taken hold among the French. Today, however, after the trend of the beloved and sought-after hints of boisé (wood) and therefore of the (ab)use of barriques, many seem to be returning to concrete and appreciate its results, both in fermentation and aging.

One must also take into account the historical trend: in Italy we experienced a long period of consumerism during which a large part of the wine was vinified, aged very little (or not at all) and bottled. Steel was therefore perfect in this case because it was easy to clean and move: for non-aged and easy-to-drink wines it was the perfect solution! Also, the resins used to coat the concrete tanks in those years had poor durability. Luckily, giant leaps have been made today even for the coatings!

We all know that wine is a living and constantly evolving substance, sensitive to light and temperature. Strong temperature changes that would accelerate or, on the contrary, excessively slow down the chemical transformation of wine must be avoided.

The thickness of the walls of the tanks (about 15cm) and the material itself, which is a very bad thermal conductor, thus allow the wine to perceive a gradual change in temperature. For this reason, the concrete tanks are perfect for alcoholic and malolactic fermentation because they keep the temperature stable and avoid unwanted fermentation interruptions. Finally, we also use concrete for the aging after the passage in wood: the wine turns out more stable, being subject to fewer vibrations, fewer heat changes, and even less oxygenation thanks to the internal coating.

Today there are also NON-coated concrete tanks on the market, which give the wine a gradual micro-oxygenation, similar to that given by wooden barrels but without the aromatic influence typical of wood. The theme of micro-oxygenation also connects directly to that of the shape of the tank. In recent years you surely have heard of the famous ‘concrete eggs’, the renowned uncoated egg-shaped concrete tanks created by the historic French company Nomblot, which we have been experimenting with for a couple of years with strong curiosity and interest. The egg shape would favour the kinesis of the must and the ‘natural concrete’ would favour micro-oxygenation and thermal insulation, thus leaving the acidity unchanged and minimizing the risk of wine ‘reduction’.

In general, we can say that concrete is excellent for obtaining wines destined to improve and mature over time; it does not aromatically interfere with the varietal hints of the grape and, on the contrary, enhances its roundness. Instead steel is the right choice for fresh white wines or young, easy-to-drink red wines, poor in tannins.

Either way, we have always liked concrete, whether vitrified or not. We have never abandoned it since the 1960s, neither for fermentation nor for aging.

Although there is no single formula that works for all types of wine and for each variety, we believe it is the perfect material for our Sangiovese. Sangiovese is a grape variety that has high acidity and strong tannins: it needs time, it needs to rest, and therefore a long period of maturation and aging. It is a variety of grapes that oxidizes easily, so it is risky to use barriques and small containers: a high exchange of oxygen and strong temperature changes would cause the wine to age too quickly.

Vitrified concrete tanks are perfect for this purpose, since they allow a gradual maturation of the wine in an environment with low oxidation, giving us wines with high aging potential but with a fresh character. Just taste our cru, the Chianti Classico Vigneto Boscone, which ages exclusively in concrete for 26 months, to be able to understand the crispiness and freshness that we can obtain thanks to this fantastic material. 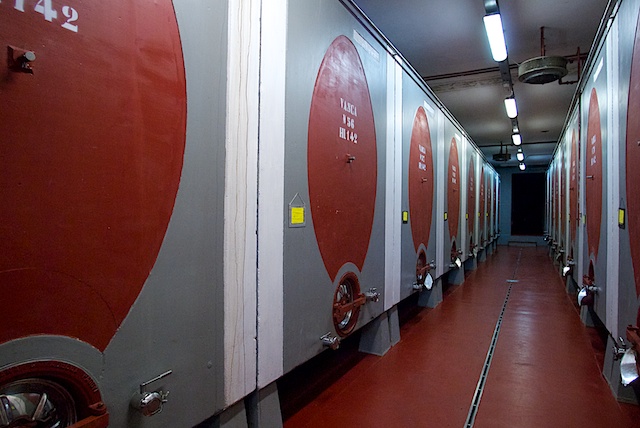 My grandfather , Emilio Toriello , would never put his wine in anything but a wooden barrel ………………………..

Way to go Monterinaldi! I believe in your project.